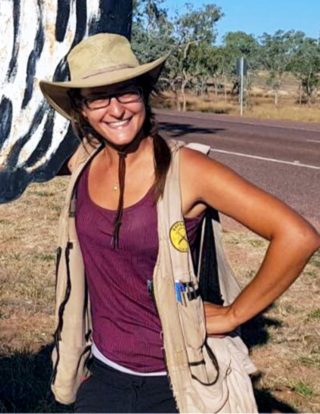 My name is Silvia Volante. I am currently a PhD student specializing in structural and metamorphic geology, especially in polymetamorphic domains, at Curtin University under the supervision of Prof. Li, Dr. Pourteau, and Prof. Collins.

During my Master thesis project at the University of Milano (Italy) I studied the tectono-metamorphic evolution of the Argentera–Mercantour Massif, one of the external massifs of the Western Alps, which encompasses relicts of a Variscan suture zone. During and after my Master I collaborated with the Group of Structural Geology of the University of Milano (G. Gosso, M. I. Spalla, D. Zanoni, and M. Zucali) and the University of Nice-Sophie Antipolis (L. Caméra, M. Corsini, J. M. Lardeaux, and J. Mascle) to construct scientific documents supporting the application of «les Alpes de la Méditerranée» as a UNESCO World Heritage Site with criterium VIII (geology).

In September 2016, I joined Prof. Zheng-Xiang Li’s Earth-Dynamics Research Group at Curtin University to investigate the tectonic evolution of northern Queensland during the Palaeo–Mesoproterozoic in order to better constrain the configuration and evolution of Precambrian supercontinent Nuna. This study aims to better constrain the tectono-metamorphic evolution of the Georgetown Inlier (NE Queensland) by reconstructing and interpreting multi-point pressure–temperature–deformation–time (P–T–d–t) paths for different sectors of the Georgetown Inlier. During this work we will apply a multi-scale petro-structural analysis combined with P–T estimation, and geochronology (U–Pb in zircon and monazite). The outcome will be interpreted in terms of the number of tectonic terranes that constitute the Georgetown Inlier, the tectonic position and roles that the Georgetown Inlier played during the assembly of the supercontinent Nuna.

My interest lies in reconstructing the deformational and metamorphic history of crystalline basement units. I follow a multi-scale analytical approach based on petro-structural mapping of complex lithostratigraphies, micro-structural and petrological analysis, and thermobarometry. By combining superimposed deformational fabrics and their defining mineral assemblages with pressure–temperature paths deduced from metamorphic assemblages. This multi-scale approach allows for a reconstruction of successive palaeo-thermal gradients within and between tectonic units and is key to deduce the tectono-metamorphic history of collisional belts.