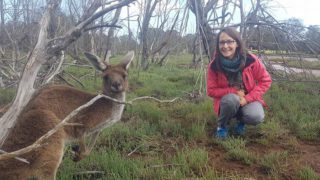 Silvia specialises in structural geology and metamorphic petrology, particularly in polymetamorphic domains. Her interest lies in reconstructing the deformational and metamorphic history of crystalline basement units. Silvia follows a multi-scale analytical approach based on petro-structural mapping of complex lithostratigraphies, micro-structural and petrological analysis, and thermobarometry. She makes use of strain-related petrological heterogeneities to link superimposed deformational fabrics with pressure–temperature paths deduced from metamorphic assemblages. This multi-scale approach allows for a reconstruction of successive palaeo-thermal gradients within and between tectonic units and is key to deducing the geodynamic history of collisional belts.

During her Master thesis project at the University of Milano (Italy), Silvia studied the Argentera–Mercantour Massif, one of the external massifs of the Western Alps, which encompasses relicts of a Variscan suture zone. She collaborated with the Group of Structural Geology of the University of Milano (G. Gosso, M. I. Spalla, D. Zanoni and M. Zucali) and of the University of Nice-Sophie Antipolis (L. Caméra, M. Corsini, J. M. Lardeaux and J. Mascle) to construct scientific documents supporting the application of «les Alpes de la Méditerranée» as a UNESCO World Heritage Site with criterium VIII (geology).  In September, she joined the Earth Dynamics Research Group at Curtin University to investigate the tectonic evolution of northern Queensland during the Palaeo–Mesoproterozoic.